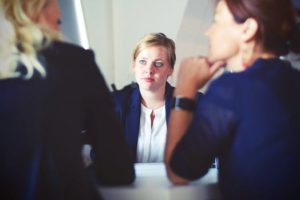 Pay disparities can creep into all manner of compensation decisions, from initial hire through performance bonuses and spot rewards. Aneeta Rattan, assistant professor of organizational behavior at the London Business School, researched the extent to which hiring managers’ bias impacts gender and race in STEM fields.

In a 2017 research report she coauthored, “Identical Applicant but Different Outcomes: The Impact of Gender Versus Race Salience in Hiring,” Rattan and her fellow researchers found that stereotypes can affect hiring and salary increase decisions. When CVs were shown to male undergraduate students in a series of experiments, they tended to treat those that made clear the applicant was a woman less favorably for a STEM job. When the CVs highlighted the fact that the applicant was Asian-American, the candidate was rated more favorably, even though the CVs were largely identical.

“In the first two studies, we found a direct effect, meaning that participants who were thinking about this candidate in terms of her gender rather than her race would have offered her less pay,” she says. In the third study, where participants read about the candidate based on gender they found an indirect effect on pay—she was rated less skilled and worthy of hiring. “What did we find that was consistent across the studies? The first finding that was consistent across all of the studies was that, when male participants were thinking about this woman in terms of her gender rather than her race, they evaluated her as overall less skilled and as less hireable,” she says.

A new survey from business advisory firm Willis Towers Watson finds that companies are facing growing pressure to improve their pay-for-performance programs and ensure that fair pay practices are in place throughout their compensation systems. Sixty percent of U.S. employers are planning to take some action this year to prevent bias in hiring and pay decisions. Several areas are being targeted for improvement:

CLOSING THE GAP
Inequity in pay decisions across various populations within a company damages the relationship between employer and employee, says diversity consultant Jennifer Brown, author of Inclusion: Diversity, the New Workplace and the Will to Change. The message that it sends to already underrepresented communities is that they’re less welcome based on their identity. Employees who are affected find it “a struggle to bring your full self to work,” she says.

Pay gaps often start with the hiring process. Brown says it’s increasingly common—and in some states, against the law—to ask about salary history in hiring. This helps prevent those who have traditionally been underpaid from widening their salary gap with every move or promotion, she says.

Research shows that companies can use a variety of other methods to weed out bias in hiring and pay, says Siri Chilazi, research fellow in the women and public policy program at Harvard University’s Kennedy School. Throughout the hiring process, from candidate sourcing to choosing resumes to interview performance evaluation, bias can creep in in many ways.

One of the first steps should be to remove potentially bias-inducing information, such as gender, race and others, from resumes. Gendered language in job ads also contributes to gender-related hiring disparities. Words like “ninja,” “aggressive,” and “independent,” are “male-coded words,” she says. “Words like warm and caring and nurturing, team, are female-coded.” Such coded ads attract disproportionately higher levels of people based on gender. Chilazi recommends reviewing these criteria and possibly using tools like Textio Hire to find problematic language in job ads.
The Willis Towers Watson survey found that employers are recognizing the need for new technology solutions. Less than half (45%) of employers use technology beyond spreadsheets to implement pay programs. More than half (52%) are planning or considering such solutions.

PERFORMANCE-BASED STANDARDS
The Willis Towers Watson survey also found that performance management is important to employers interested in pay equity. Forty percent of respondents are planning on or considering changing the focus of performance management to include skills that the business will need going into the future.

“Some of them are really stepping back to say, ‘What am I paying for? And is what I’m paying for what I need to run my business?’” says Sandra McLellan, North America practice leader, rewards, at Willis Towers Watson. “[Am I] rewarding for performance thinking about those incentive plan designs, am I really paying my top performers that are really delivering the results I need today? Or have I created a program that actually doesn’t tie to the kind of performance I need?’”
Still, companies need to be mindful that “performance” criteria don’t have stereotypes attached, Brown says. Whether you’re awarding bonuses or perks to recognize performance, it’s important to be sure that bias isn’t a factor. Companies need to think through matters “relating to what success looks like, who has succeeded in a certain role, or with a certain project. I think we’re more comfortable recognizing performance that looks familiar to us, that we’re comfortable with,” she says. Reviewing the criteria on which performance is evaluated and ensuring that each employee can contribute in a meaningful way is also essential to maintaining compensation equity, she says.