The Zen of Religious Accommodation 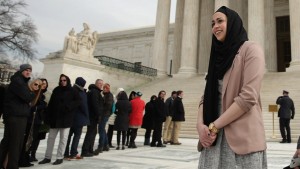 Can an employer face liability for failing to accommodate a religious belief when the employee has not mentioned religion or asked for accommodation? Yes, according to the U.S. Supreme Court (Equal Employment Opportunity Commission v. Abercrombie & Fitch Stores, Inc., No. 14-86, Supreme Court of the United States (June 1, 2015)).

Abercrombie & Fitch, a retail clothing store, maintained a “Look Policy” that applied to all sales floor employees. Under the policy, employees were not permitted to wear black clothing or caps. Samantha Elauf, a Muslim who wears a head scarf, applied for a job at a Tulsa, Oklahoma Abercrombie store. Heather Cooke, the store’s assistant manager, interviewed Elauf and gave her a rating that qualified her to be hired. To clarify whether wearing a head scarf would conflict with Abercrombie’s policy prohibiting employees from wearing caps, Cooke consulted with her district manager, Randall Johnson. Cooke told Johnson that Elauf wore her head scarf because she is Muslim. She alleges that Johnson told her that Elauf should not be hired because wearing a head scarf would violate the Look Policy.

The U.S. Equal Employment Opportunity Commission (EEOC) filed suit, claiming that by refusing to hire Elauf, Abercrombie has failed to provide her a reasonable religious accommodation in violation of Title VII of the Civil Rights Act of 1964.

Motive is the Key

Here, the manager has a suspicion that wearing the head scarf may be a religious practice. Arguably, the manager strictly applied the dress code policy in order to avoid religious accommodation.

The Court wrote, “Thus, the rule for disparate-treatment claims based on a failure to accommodate a religious practice is straightforward: An employer may not make an applicant’s religious practice, confirmed or otherwise, a factor in employment decisions.”

“For example, suppose that an employer thinks (though he does not know for certain) that a job applicant may be an orthodox Jew who will observe the Sabbath and thus be unable to work on Saturdays. If the applicant actually requires an accommodation of that religious practice, and the employer’s desire to avoid the prospective accommodation is a motivating factor in his decision, the employer violates Title VII.”

Based on the Supreme Court’s decision, lower trial courts will be more willing to infer a discriminatory motive if the circumstances demonstrate the employer somehow “should have known” or had constructive knowledge of the applicant’s need for an accommodation. The decision also requires employers to take a harder look at their appearance policies, especially when those policies may impact an applicant or employee who is required to wear certain items of clothing or dress in a certain way because of his or her religion.

Employers need to ask themselves if the policy, such as a dress or grooming standard, is really important enough to maintain. At a minimum, employers need to ensure that their management-level employees are well-versed in Title VII’s requirements and know how to respond when confronted with an applicant or employee who is dressed in a way that may conflict with a workplace requirement.

The Supreme Court has succinctly reminded employers to once again look carefully at the reason or basis for a challenged employment decision. Religious practices and work rules often collide on the job. The Court has made clear that mere suspicions and unconfirmed assumptions about religious practices may trigger Title VII liability.