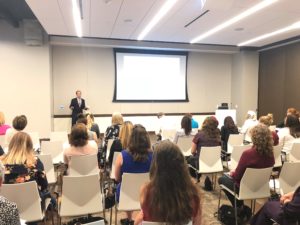 SDEA’s Mid-Year Employment Law Update took place on August 16, 2018 and was led by employment law attorney Chris Olmsted with Ogletree Deakins.  Chris covered a wide range of topics, and the highlights from the event are outlined below:

Various state and federal Independent Contractor (IC) tests have been utilized in California, and employers have often struggled with the difficulty and uncertainty of weighing different factors on different tests.  Recently, the California Supreme Court provided clarification; however, the Court imposed a new test dramatically changing who might be considered a properly-classified IC.

The “ABC” test imposed by the Supreme Court hasn’t been widely-used in California.  To determine whether your Independent Contractor is properly classified, every factor must be met.  Chris cautioned those in attendance that failing to prove just one of these three factors may sufficiently establish IC misclassification and employee status.  The criteria for the ABC test are as follows:

B.      “The worker performs work that is outside the usual course of the hiring company’s business” and

C.      The worker is “customarily engaged in an independent trade, occupation, or business of the same nature” as the work performed for the hiring entity.

Looking forward, Chris made a series of recommendations regarding employment of Independent Contractors:

1.       Analyze all current Independent Contractors under the new test;

2.       Do not contract with new IC’s without assessing whether you can meet the ABC test;

In a recent case involving Starbucks Corporation, Troester v. Starbucks, the California Supreme Court surprisingly rules that the “de minimus” doctrine, minutes worked that are too minimal to track, is not recognized in California, and that all time worked must be paid even those minutes before and after clocking out but still performing work duties.  The Troester verdict provided common examples of what may have been previously considered “de minimus” time that now must be counted and paid to nonexempt employees:  Time spent locking up the store, bringing in sidewalk furniture, setting and disarming alarm systems, even walking a fellow employee safely to their car.

Chris recommended that employers develop a system to add the brief periods of additional time worked to employees’ timecards, even if it only adds up to a minute or two of extra time.  Additionally, employers are encouraged to take a close look at their time-rounding practices, and ask if there are good business reason to round time to the nearest tenth-hour, quarter-hour, etc.  He asked attendees to consider if is better not to round at all rather than to round and inadvertently favor the company over the employee, potentially creating problems and opening your company up to liability.

Calculating overtime pay rates must include a review of the employee’s “regular rate of pay,” not just his or her base pay rate.  With the exception of a discretionary bonus (holiday bonus or anniversary bonus as an example), bonuses must be considered when calculating an employee’s overtime hours.  Depending on the period of time that the bonus covers, employers may need to divide the bonus equally amongst several pay periods. Chris offered a tool published by Ogletree that details different compensation, whether and how it should be counted toward the regular rate of pay.  Feel free to reach out to Chris or SDEA for that tool.

On July 1, 2018, the Department of Fair Employment and Housing expanded National Origin protections.  Under the expanded definition, “National Origin” means:

3.       Marriage or association with a protected group;

4.       Membership in an association/organization;

5.       Involvement in schools or religious organizations.

·         Who can request the pay scale for an open position?  Upon request, companies are required to provide this information to applicants after the initial interview for the open position.

When promoting or reassigning existing employees, companies are permitted to consider current pay.   However, compensation decisions must be justified by legitimate and non-discriminatory business criteria, rather than consider past pay history.

It is important to note that these bills have not been passed but rather are pending legislation before the Governor for the remainder of 2018 and into 2019.  If passed:

b.       SB 1284:  Would require employers with 100+ employees to report annual pay to further pay equity amongst women and minorities

d.       SB 1343 and SB 1223:  Would expand sexual harassment prevention training requirements to all companies that have five or more employees and would need to include all employees in the company

f.        AB 2366:  Would require employers to provide a leave of absence for sexual harassment victims