How To Become a Less Biased Version of Yourself 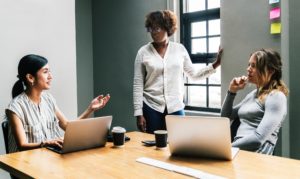 If you are interested in being less biased–and particularly less prejudiced–I have good news and bad news.

Let’s start with the bad. Human beings are naturally biased. The only way we can make sense of the world is to simplify it by putting things and people into mental category “buckets” that are either good or bad, interesting or boring, etc. There are many of these; just check out this visualization to see the variety.

An unbiased human would simply be unable to function, wasting vast amounts of time trying to experience the world as it is, without making any inferences or assumptions. Imagine not taking a flight because you cannot trust the pilot, or not assuming that the person pointing a gun at you may have unfriendly plans for you.

On a related note, scientific research concludes that there are no convincing methods for eradicating prejudice entirely, and that the substantial amounts of cash spent on combatting biases are probably wasted, because there’s no proven way to make people unbiased.

The good news is that while eliminating bias and prejudice is impossible, there are degrees of bias and prejudice, partly as the product of experience. So it’s safe to assume that if you’re reading this, you are likely better at keeping a lid on your biases than most people. This is because you are both aware of your biases, and probably more curious and open to experiences.

So what, then, can we learn from the available research to apply to ourselves, if our goal is to become a less biased version of ourselves? Here are four key recommendations:

This means learning to tolerate and perhaps even like people who think, act, and feel very differently than you do. It may be as simple as watching a TV program that you hate, or listening to a podcast that you vehemently disagree with. The better path would be to actually make an effort to interact with people who question or dislike your values, at least to understand how they think.

One of the most consistent findings in social psychology is that simply being exposed to people who are different–this includes sociodemographic and ethnic diversity–tends to make us a bit more open-minded and tolerant, particularly if we can find some common ground or overlap between their views and ours. That is generally the case, you just have to try.

Empathy is an old topic in psychology, defined as the ability and willingness to take other people’s perspectives to understand what they are thinking and feel what they are feeling. Although there are reliable training programs to boost empathy even in psychopaths, you can practice and develop your empathy alone.

Start by analyzing what other people may be thinking, their motives and attitudes. Then try to justify why they may think and feel as they do. In particular, pay attention to those who are less privileged and disadvantaged, and consider–at least temporarily–that they may not be as lucky or successful as you, despite being as interesting, talented, or hard-working (if not more). Think of how you would feel if you were in their shoes. These and other simple exercises on perspective can help you create a habit for empathic thinking and feeling, which will make you more tolerant, and perhaps even less biased.

In other words, get real. Awareness of bias is a necessary step for dealing with it, even if it’s not the entire antidote. One interesting tool to get there is the implicit association test, which while clearly not perfect, has been used for decades to explore the gap between people’s explicit and implicit biases. For a range of widely used and well-designed free tests including on race and gender, try Harvard University’s tests, which will give you instant feedback and tell you how you compare to most people. For example, I took the gender one and it confirmed that I’m moderately sexist toward men, rating women’s career potential more highly.