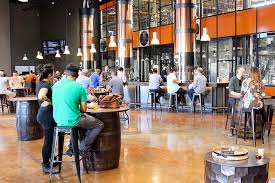 Forged in 1995, AleSmith Brewing Co. has been recognized by consumers and critics alike as one of the world’s foremost craft brewers and emblematic of the San Diego craft beer community. Under the leadership of husband and wife team Peter and Vicky Zien, both home brewers who purchased the company in 2002, and with help from their team members, achievements have included numerous medals won at prestigious national and international beer competitions. AleSmith was named Small Brewing Company of the Year at the Great American Beer Festival in 2008 and has produced iconic brews including Speedway Stout, San Diego Pale Ale .394, and Old Numbskull. In 2017, the company collaborated with legendary Southern California reggae rockers Sublime to create AleSmith Sublime Mexican Lager.

In spite of a three-year period of rapid growth that’s seen the company move from the cozy confines of its original location on Cabot Dr. to a 105,000 square foot facility on a Miramar street actually named for the brewery, AleSmith’s operation, on AleSmith Court, retains a family feel. Sit in a meeting with Ms. Zien, a copious note taker, and you’re likely to notice the inscription “PEOPLE” on the inside flap of her notebook.

The AleSmith team, collectively known as the “Grand Crew,” gathers monthly for a meeting at which Peter shares the latest regarding the company’s vision and growth, while sprinkling in wisdom born of more than 20 years of brewing experience, both amateur and professional. Peter and Vicky are known for reminding Grand Crew members of the importance of respect and appreciation for others, as well as the importance of offering 5-star service.   “That includes those who some might consider to be our competition,” Peter says. “A rising tide lifts all ships, goes the metaphor, and we’re strong believers that it’s equally important for us to be conscientious stewards of craft beer as a whole, the San Diego beer community, and AleSmith.”

Peter believes a strong culture of respect and collaboration imbues Grand Crew members with the courage to speak up and a creativity that’s led some to get involved in the beer creation process themselves. AleSmith Grand Crew members have been responsible for conceptualizing beers such as Vietnamese Speedway Stout and Spezial Pilsner.

Mark your calendars and celebrate San Diego Beer week the first week in November with AleSmith Brewing Company to see what’s now and what’s next from one of San Diego’s craft beer pioneers. They’ll be pouring Hawaiian Speedway Stout, several new barrel-aged blends, and unveiling over fifteen new Speedway variations during their annual three-day Speedway Grand Prix event. SDEA members who would like to schedule a tasting at AleSmith can contact e.mcmanus@alesmith.com.

Also, AleSmith is growing. So if you know someone with a passion for beer, tell them to contact careers@alesmith.com.